It’s rainy and cold this morning and none of us want to leave the house. It seemed like a perfect opportunity to finally let the boys unwrap their presents from Tante Snoep from last weekend’s beach birthday. As you can see, it was a big success and now they are sleeping off the excitement.

No movement on the housing front this week, which is slightly annoying. I know that we will find the right house. This morning GG suggested that we go for the house that has a theatre and cafe built into it and I perform regularly as an Elvis impersonator… I am not really sure where that idea came from since I am confident I have never really had a desire to be an Elvis impersonator. Apparently her logic is based on sitting hours in the car with me in North Carolina when I was singing along to the all Elvis channel on satellite radio and that I would probably really like to wear one of those flashy jumpsuits. Oh, and also that I am American, just like Elvis was 😉 I am not sure that this logic would stand up to closer examination!

I started my evening program this week. It was great. I was really nervous, got there 15 minutes before any other student. I had the usual dialogue in my head about whether or not I was smart enough to participate, etc. It’s being taught at the University of Amsterdam (UvA). I hadn’t been there before so I was walking through an alley and ended up looking right at this building. 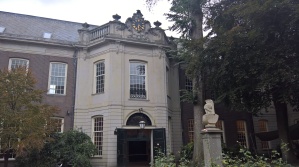 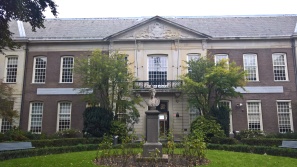 Turns out, this is where my class is. I felt smarter and more inspired already! There are 20 people in my program, about 12 in their 20s and the rest going up the age ladder. I am going to be looking forward to Wednesday nights!

The mayor of Amsterdam, Eberhard van der Laan, passed away  late Thursday night. He was relatively young, 62. However, he had cancer that couldn’t be treated so around the middle of September he stepped down from active duty. In his letter to residents of the city, he wrote in closing “Zorg goed voor onze stad en voor elkaar. Vaarwel” (In translation: care for our city and for each other. Farewell.) Such a small sentence and so powerful.

Wishing you a good weekend, preferably a dry one!