Our man Henry is eleven today. He seems to know that there is something different in the air but is not letting it stop him from relaxing in the office, as you can see… 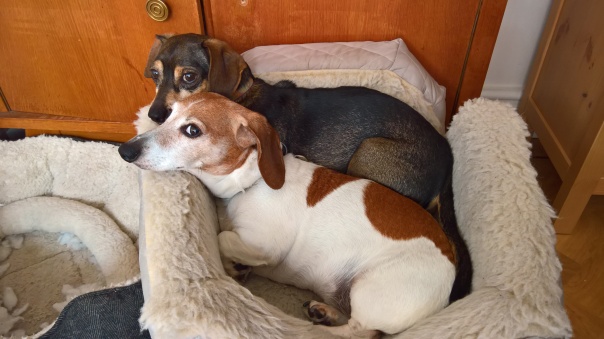 Sometimes I think there is something slightly wrong with how much I love my pets. I wonder if other people love their pets so much. I definitely don’t think I am alone in this.

Henry is the rock, much like the man he is named for. He’s our man about the house who firmly believes that you should do the things you enjoy, put up with the quirks of your family members and never miss an opportunity to build a fort out of whatever the people have left lying around. He’s the service dog to his brother, George. He likes to go on walks with me, where he practically flies to be out in front so he can make sure everything is acceptable. This is in contrast to when he is out with George, then he’s always walking two meters behind.

Best of all, when Henry barks, it sounds like the bark of a dog that weighs about 100 kilos instead of one that weighs 7.5. He has a massive big dog bark. I love that he tries, even when he really doesn’t want to (and, yes, you can tell when he doesn’t want to) and that he always signals when he wants to go out (self taught). When he curls up next to me and I feel his solid little rhinoceros body, I know I am going to be okay.

On account of his very stocky frame, my mom used to refer to his  “Hippo Hips”and “Rhino Butt”. It didn’t stop him from dancing with her to the Gipsy Kings 😉

Since McDonald’s doesn’t deliver, I’m going to get on the bike in a few minutes and head over to get their birthday plain double cheeseburger. Right after I give him another set of hugs 🙂