We survived the island of Terschelling. Or perhaps I should say it survived us. It was a birthday that somehow fit me very well. From the hurried scramble and swearing in traffic to get to Harlingen for the last fast ferry on time, to GG telling me at the bicycle rental that she should take the bike with the dog trailer due to the fact that she was a much more experienced cyclist to arriving at the vacation villa (that’s what they call them) at the end of a 15 km bike ride to find out that they had given us one that did not allow pets. This was only on Friday night 😉

Saturday, we had perfectly overcast weather which made it ideal to walk the beach and try out the water. Well, at least George and I did. GG and Henry are not cold water types so they stayed safely out of the wave’s reach. If I remember correctly, I think I was chill for about an hour, due to the combination of wind and salt.

On my Sunday, the weather was sunny and bright. Perfect birthday weather if you are not a grouch like I am 😉 Birthday cake for breakfast and then off to the another part of the island. As evidenced, this was much more to someone’s liking: 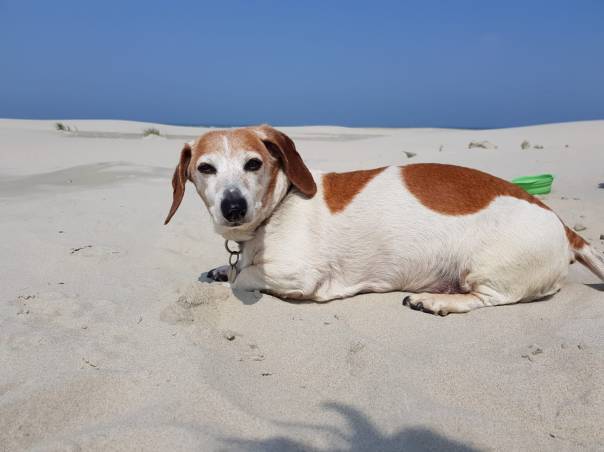 I feel like Henry should come with a label that says “Resistance is futile, you cannot avoid being charmed by me!” Sunday, we all caught a sunburn. The combination of the all the fresh air, the wind, the sea, the bicycling everywhere were really good for inducing sleep. At night, it’s very dark there and positively still. Which I liked alot. I would go back, but in the fall.

On Monday, we loaded the bikes back up to head back to the harbour. This time, things did not go smoothly. Somewhere right outside of the vacation park, George decided he absolutely did not want to be riding in the dog trailer and damnit, he would find a way to get out. The 15km ride took two hours because we had to keep stopping to figure out ways to convince George to leash his inner Cujo. He was so determined to get out, he kept throwing himself against the side of the doggy trailer until he put a hole in the screen that he could then get his teeth into and tear through until he had a big enough opening to hang his body out of. While this is going on, Henry has also had enough and proceeds to bark at the top of his lungs the whole way through. Every village received the message that we were passing through, without a doubt.

I was rather at my wit’s end when we reached the harbour. I was so mad at George that he tried to ignore me for the rest of the day because he knew he was not in good graces. At the bike rental, they were very nice when I talked to them about the damage and they suggested next time that we use the bike basket instead of the trailer type. They did give us our deposit back because another dog previous to us had eaten the top so they didn’t feel like they could charge us and not them. Which is lucky for George because he doesn’t get that much allowance!

Of course, here he is on the way home, while I am getting gas. Looks like the very picture of well behaved dog, doesn’t he? 😉 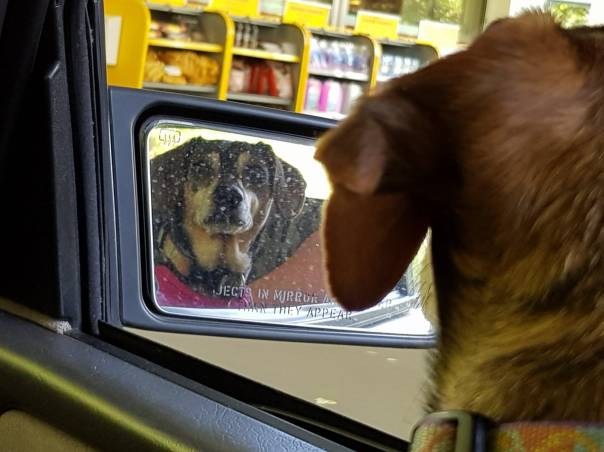 Tomorrow it’s a lawyer day. In the morning to the lawyer about the ending of my employment, to make sure everything is covered from a contractual piece. In the afternoon, to the lawyer for the paperwork for the new house and the future business. I am excited!

OH— I passed my Dutch as a second language exams!!!!! Not by much, but I passed all four exams at Level 2 all the same!!!!